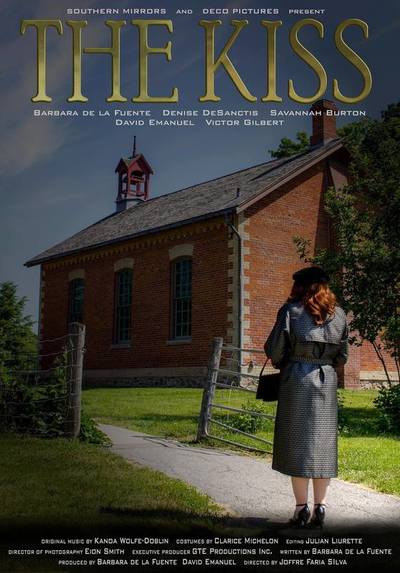 If anything, just for a kiss

We are accustomed to the idea that decades ago the world was more conservative, that differences were not tolerated, that the family nucleus was the foundation for the exact fulfillment of the role of men and women in society.  True.

But... have things really changed that much?  The film The Kiss,  directed by Joffre Faria Silva, brings in a nuanced view of the 1950s, an issue that is still so prevalent today.  The social pressure that keeps people from being who they want to be.  The school, as an institution created to be a base for civility and a producer of “good manners”, is also, evidently, a place that censures any attitude that goes beyond the norms that society expects you to follow.

The film's rhythmic pace, elegant filmography, and engaging soundtrack lull the discussion in the face of a serious incident involving Paul (Victor Gilbert), the son of Mrs. Tancredi (Barbara de la Fuente, who also wrote the script).  Mrs. Williams, the school principal (Denise DeSanctis), Mr. Baker, Paul’s teacher (David Emanuel), and Mrs. Tancredi might perhaps think or act in a different manner…  No, they might not.  They know that their actions must correspond in a way that reflects the ideals of a society that has certain moral codes.  And therein lies the perfect choice for the era in which the film takes place, the 1950s, when schools played a fundamental role in the constitution of this morality.

The film creates a mood of dubious feeling, showing the exaggeration of a simple kiss being treated so seriously.  We know why.  We know what that meant for the time.  But the audience that watches the film is here today, more than 60 years later, and it also understands the absurdity of the situation.  Well, maybe not.  Even today, discussions about gender neutral bathrooms in schools, what is considered "appropriate" clothing for boys and girls, and kissing among boys in schools is still a contentious point of debate.  Maybe the world has not changed that much.

It is interesting to note how, in the film, everyone knows they have to accept the imposed situation, but at the same time, each one finds a way to mitigate such imposition.  Herein lies the endurance of the film.  Behind the conservative formation of all there is the human aspect, there is a more tenuous, not less complex, layer that meets the established rules.  Bettina (Savannah Burton) shows that it is possible to resist conservatism, that it is possible that one day little Paul can make his own choices.
​
Yes, everyone knew that it was not just a kiss.